S&P 500, Gold, Dollar Index, and the Probability of Republican-controlled House

There's been a lot of talk lately about what factors might be driving the market.  The three factors I've seen suggested recently are the dollar, gold, and political expectations.  I thought I'd take a few moments to offer a very simple picture of the relationship since September.  The chart below shows the S&P 500 (SPX), the Dollar Index Futures (DXY), NYMEX Gold (XAU), and the InTrade probability that Republicans will control the House after the midterm. 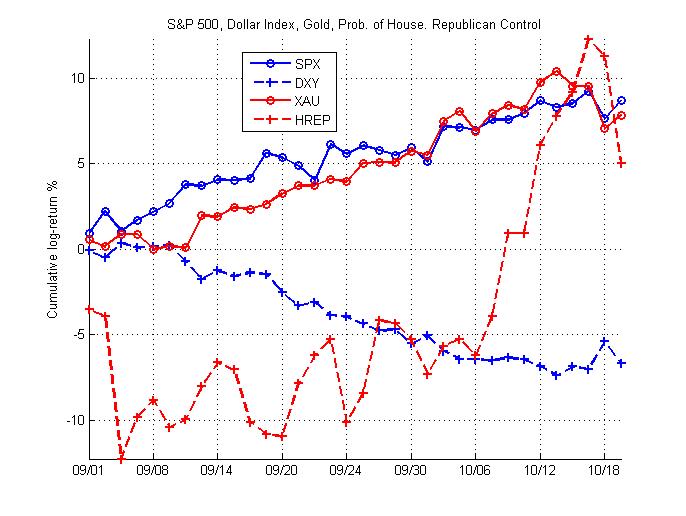 I've taken two very simple approaches to assessing the relationships between these factors and the S&P 500.  They should be viewed as "approximations" at best.

The first approach is to calculate the correlation between the S&P 500 and these factors since September, both with and without a one-day lag.

Without a lag, the correlation between the log-return of the S&P 500 and the dollar, gold, and political environment are -0.54, 0.37, and 0.17 respectively.  These coefficients can be interpreted as indicating that, within a given day, the S&P tends to move the opposite direction as the dollar and the same direction as gold and the probability of a Republican-controlled House.  Of these, the magnitude of the coefficient is largest on the dollar index, indicating that this relationship is likely strongest.

When we consider a lagged correlation between the S&P 500 and these factors, we obtain a different picture.  In this case, the correlation between the S&P 500's return tomorrow and today's return in the dollar, gold, and the probability of Republican House control are 0.55, -0.29, and -0.39 respectively.  These coefficients suggest the opposite of the within-day coefficients above, though the magnitude of the dollar correlation remains strongest.  This reverse relationship is likely due to the significant negative autocorrelation in the S&P 500 over the sample.

The second approach to assessing this relationship is to fit a GLM to the data to predict tomorrow's S&P 500 return from today's return in the factors.  In this case, I fit a simple normal model and obtain values of \beta of 0.79, 0.11, and -0.068 for the dollar index, gold, and probability of Republican-controlled House.  However, the t-statistic is only greater than 2 for the dollar index coefficient.

There are some measurement issues to address.  First, we're comparing the spot equity market to futures markets for gold and the dollar index.  Second, InTrade's probability of a Republican-controlled House is a very imperfect proxy for political environment. Not only does this probability ignore both the Senate and the Executive branch, but it also assumes that the House and Republican policy is capable of improving business climate.

However, taking this naive analysis at face value, it appears that the dollar does appear to be driving the S&P 500 more than gold or expectations of political environment.