I’m leaving my Ph.D. program after this April to take a position in the private sector, and I don’t plan to return to academia.  As a result, I’m migrating my personal information to a new domain – www.michaelbommarito.com.  I’m also taking the opportunity to segment my blogging.  While I plan to continue using this blog for analysis related to exchange-traded funds or similar products, I will be focusing more broadly on the economy, technology, and programming on my personal blog.  Hopefully this will allow me to communicate in more targeted ways to readers.

Instead of posting papers separately, I’ve decided to transition to a weekly reading list format.  I’ll update this post over the course of the week, but here’s the initial list:

I am currently considering entering the private labor market this summer.  If you are interested in considering me or referring me for a position in finance or research, please feel free to contact me by email or view my resume / C.V.

Along with my coauthor A. Duran, I’m helping organize the International Conference on Mathematical Finance and Economics. This conference will be held at the Istanbul Technical University (ITU) in Turkey from July 6-8.  I strongly recommend considering this conference for researchers in finance and economics, especially those who are taking “integrated” or “multi-disciplinary” approaches to their work.  The CFP is shown below: 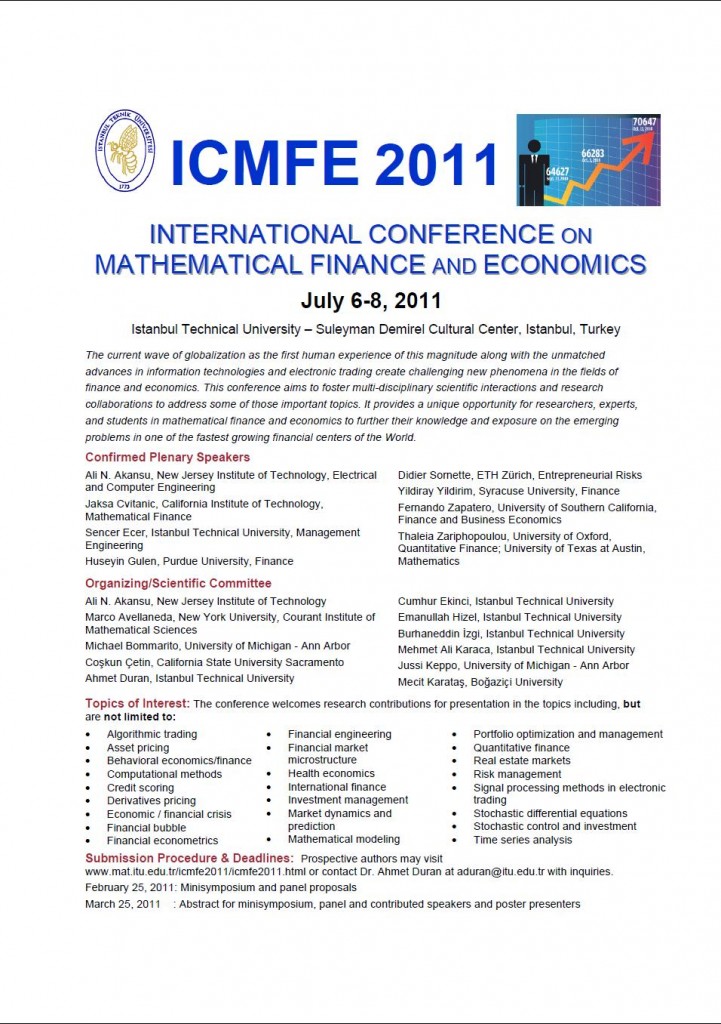 Abstract:The Libor Market Model describes the evolution of a discrete subset of all interest rates quoted in the market. Generation of the complete yield curve from a simulated set of rates (the so-called “Libor rate interpolation”) is one of the basic challenges which are faced by a practical user of LMM. Incorrect implementation can lead to arbitrage in the model and render generated prices invalid. In this paper, we present a rate interpolation scheme which not only is arbitrage-free, but also generates a natural-looking, smooth term structure of interpolated rates’ volatilities. It is conceptually simple and computationally efficient.

S. Tsirel, A. Akaev, A. Fomin, A. Korotayev. Log-Periodic Oscillation Analysis and Possible Burst of the “Gold Bubble” in April – June 2011

Here’s a paper for the gold debate that addresses behavioral aspects in a quantitative way (D. Sornette’s bubble analysis).

Abstract: This working paper analyzes the gold price dynamics on the basis of methodology developed by Didier Sornette. Our calculations indicate that this dynamics is close to the one of the “bubbles” studied by Sornette and that the most probable timing of the “burst of the gold bubble” is April – June 2011. The obtained result has been additionally checked with two different methods. First of all, we have compared the pattern of changes of the forecasted timing of the gold bubble crash with the retrospective changes of forecasts of the oil bubble crash (that took place in July 2008). This comparison indicates that the period when the timing of the crash tended to change is close to the end, and the burst of the gold bubble is the most probable in May or June 2011. Secondly, we used the estimates of critical time for the hyperbolic trend (that has been shown in our previous publications to be typical for many socioeconomic processes). Our calculations with this method also indicate May – June 2011 as the most probable time of the burst of the gold bubble. Naturally, this forecast should not be regarded as an exact prediction as this implies the stability of the finance policies of the USA, European Union, and China, whereas a significant intervention of giant players (like the Federal Reserve System, or the Central Bank of China) could affect the course of the exchange game in a rather significant way. We also analyze possible consequences of the burst of the “gold bubble”.

I received an email from Quantitative Finance informing me that my paper with A. Duran,
A Profitable Trading and Risk Management Strategy Despite Transaction Cost, will be freely available online in a “virtual issue” of the journal on risk. This issue is designed to coincide with the RiskMinds 2010 conference currently taking place. Please access the published version of my paper from InformaWorld here or the entire Risk issue here through the end of the month.