Readers might be interested in an article that A. Duran and I have published  in Quantitative Finance this year entitled A Profitable Trading and Risk Management Strategy Despite Transaction Cost.  In the article, a number of the tools I’ve presented on the blog here have been used in the development of strategy which outperforms the S&P500 in rigorous out-of-sample testing.   We’ve made sure to check the robustness of the results, and have performed Monte Carlo simulations while varying the sets of stocks and time periods used in the calculation.   Here’s the abstract and a sample figure:

We present a new profitable trading and risk management strategy with transaction cost for an adaptive equally weighted portfolio. Moreover, we implement a rule-based expert system for the daily financial decision making process by using the power of spectral analysis. We use several key components such as principal component analysis, partitioning, memory in stock markets, percentile for relative standing, the first four normalized central moments, learning algorithm, switching among several investments positions consisting of short stock market, long stock market and money market with real risk-free rates. We find that it is possible to beat the proxy for equity market without short selling for S&P 500-listed 168 stocks during the 1998-2008 period and Russell 2000-listed 213 stocks during the 1995-2007 period. Our Monte Carlo simulation over both the various set of stocks and the interval of time confirms our findings. You can download the paper either from SSRN or Quantitative Finance.

This post was originally published on August 22, 2007.  It has been republished from a previous version of the site.

The Omega Measure is a popular fund evaluation tool, allowing traditional economic decision theory to guide asset allocators.  Assets can be compared either at specific return thresholds or across a whole range of desired of returns.  Though typically used to evaluate fund-of-fund managers’ performance, I have here applied the Omega ratio to the ETF and CEF market at various specific thresholds.

As the Omega measure at a given return threshold is calculated on the Omega function, defined to be homeomorphic to cumulative return density functions, I have used the intuitive upper / lower partial moment method of calculation.  The thresholds used are no return (0), the average SPY return, the average IWM return, and twice the average IWM return.  I have weighted each return threshold thusly: 10% for 0 return, 50% for SPY return, 30% for IWM return, 10% for double IWM return.  To be fair, I have used only ETFs and CEFs that have traded at least 250 periods, and thus only 250 periods for each.

The Simple Moving Average and Premium/Discount Analogs: Cyclic Strategies in the SPY

This post was originally published on April 13th, 2008. It was imported from a previous version of the site.

The simple moving average is easily the most fundamental indicator in technical analysis, and though there are many ways to use it, Tom Lydon of ETF Trends gives an example here.  I wanted to go into some detail on the relationship between the moving average and its predictive power, as I’ve done some comprehensive analysis of similar strategies in the currency markets.  Following along with Tom, I’ve decided to use the SPY tracker ETF for this example.

What I’ve done here is something similar to premium/discount analysis.  Pretend that the moving average is some underlying valuation, and look at what percentage above or below that price the ETF is actually trading.  You can see the actual close price and the moving average calculated on it in the top panel.  In the bottom panel, you’ll see the percentage of premium discount (in decimal form, e.g. 0.05 = 5%), as well as the cumulative return over the next N sessions.

To give some comparable horizon, I fixed the return outlook to the exact length of the moving average.  That is, if the premium/discount is calculated over the moving average of the last 100 sessions, I look at the return over the next 100 days.  Though this fails to take into account stop-loss strategies or other trailing/bracketed order methods, it gives a better picture of how the premium/discount factor and the actual market are correlated.  Furthermore, though discipline in your loss minimization is an absolute must, it makes much more sense to invest when the trend is more in your favor, both for actual performance and tax purposes.

So here are these calculations for both 100- and 200-sessions.  Note that the bottom panel of each graph only shows regions over which the numbers make sense, that is, once the moving average can be calculated and while there is still a full return period remaining. 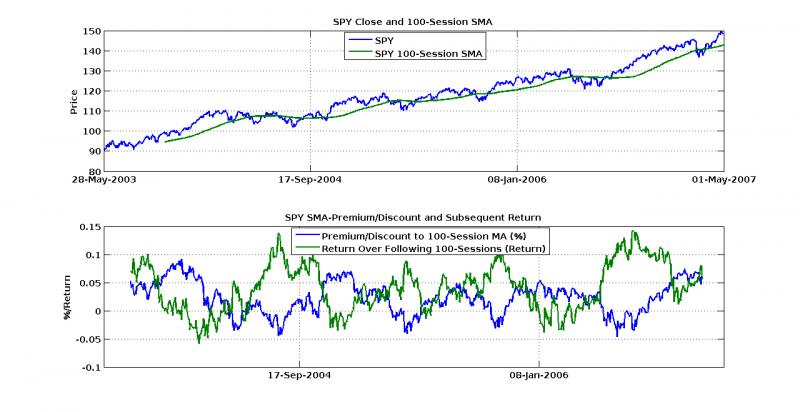 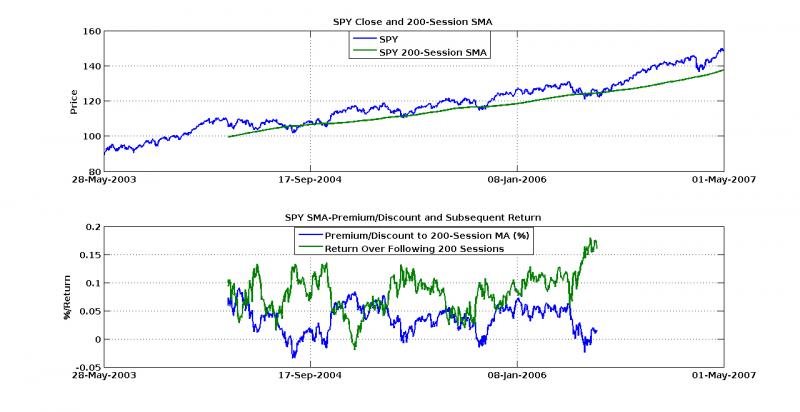 For both graphs, the results look surprisingly symmetric.  When the premium is high, returns are low, and if the SPY is actually trading at a discount to its moving average, buy-buy-buy!  Accumulating when at or below the moving average seems to be a much better strategy for longer term holds.  For example, on the 200-session moving average, buying blocks when the SPY traded near par and selling them dumbly after 200 days, you’d make a little over 10% on average.  Following a similar strategy for the 100-session and buying blocks at about 3% discount yields even higher average returns!

Though you can’t backtest the future, and index trackers are far different beasts than specialized ETFs, this data seems to point to a dumb yet successful strategy similar to premium strategies that bond and mutual fund traders often employ.  Though no replacement for disciplined loss management, it does seem to warrant further attention across the broader range of ETF products.